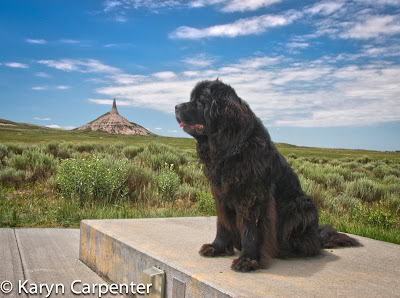 I never know where the day's end will find us. As I was taking my shower before leaving Sturgis, I had every intention of going East across South Dakota. Any move to the south seemed too much like courting heat. Maybe it was the shower pounding sense into me, but I took another look at my maps as I was getting ready to drive away from the campground, then put in a call to Don and Sherrie Hall to see if they were serious about a couple drop in visitors! They were up for it and Arayo and I were headed to Scottsbluff NE - a town I'd visited several times while working with Enesco as an events director some 20 years ago.

Sherrie and I have exchanged a few e-mails during the past couple years - mostly concerning my fear of snakes - but we have never met. They graciously took us in and shared their home, their knowledge that part of Nebraska, and introduced me to some of their friends. They had readied their beautiful RV for us and even turned on the AC so we were comfortable! What a treat!

Arayo was in heaven with a couple newfy friends to play with, and I was delighted to make two new human friends! Sherrie and Don - Thank you for your hospitality and your kind offer to return. We had such a great time, we may take you up on that!