A Reason to Drink 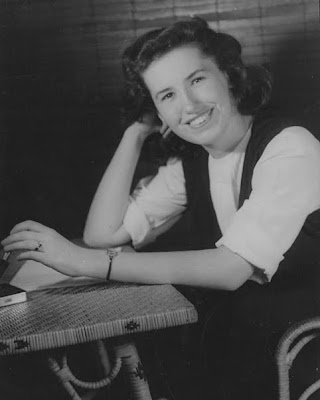 Palermo, Sicily. Sicily - not Italy. The older Sicilians will tell you there is a difference. "We are SICILIANS! Not just Italians!" (My parents would tell you a similar line "we are KANSANS! Not just Americans……")

The wasbund and I were living in a poor area of Palermo, just a few blocks from the park which was the heart of prostitution in the city. My neighbors had taken us under their wings, like pets in need of coaching and direction, and it was a big thing that the parents of the Americans were coming to visit.

They arrived on an early morning flight and I drove them along the coast, past fields and the small outer villages that lead the way to this city of insanity. As I pulled up in front of the little apartment that had become my home, the neighbor I had adopted as my Sicilian Mom came out to greet my parents.

Tradition is important in Sicily, and we were formally invited into her cool dark home where she proceeded to brew a pot of strong black espresso. I showed my parents how to load the thimble of coffee with sugar and they politely choked it down.

After a short visit, we kissed our host goodbye and stepped back into the sunlight where we were greeted by the family that lived on the other side of me. The espresso came out again, and I waited until backs were turned and exchanged my empty cup for the ones my parents were trying to struggle through.

Making our way outside again, my friend Ina spotted us and waved us over. "Come inside," she insisted, and we climbed the stairs to her second floor apartment. "Cafe?" she asked, as she headed for her tiny kitchen. "Yes, thank you," I responded, though my parents had figured out the process by now and immediately said "No!"

"Mom, you REALLY want the coffee here," I tried to explain, but Ina was one step ahead of me. "Well, if you don't want coffee, I have something better," replied Ina, and I knew we were in for trouble, because if you don't drink Ina's coffee, she is going to produce some kind of liquor, even if it is just 9 in the morning.

Happily chattering away, Ina opened her cabinet, produced tiny glasses and a bottle of some horrible hooch. In my extremely fractured Italian, I'm trying to explain to her that my parents don't drink, and really, coffee would be much better.

Ina pours a bit for my mom, the honored guest, and places it in front of her and before I know what is happening, Mom's hand reaches out, grabs the glass and belts it down! As the liquid is still making its way down her throat, she smacks the glass back onto the table and loudly proclaims "YUUUUCK!"

The room stops. Ina is not expecting this response from her cherished offering, and I am stunned that my teetotaling mother has just belted down a glass of rot-gut!

As we left Ina's house a bit later, I asked Mom (who has previously never let a drop of alcohol pass her lips) what possessed her to slug that drink down. "Well," she replied, "I remember when your cousin was in Equador in the Peace Corps. When her parents came to visit they were served guinea pigs with the little feet still in place and they had to eat them.

"I figured I'd better drink that stuff in the interest of world peace."

..........somehow the neighbors still loved her, but her phone wasn't ringing off the hook for her inclusion in a lot of peace-keeping efforts.

Photo: Mom, before her "drinking days". Probably circa 1950

Posted by Karyn Carpenter at 9:11 AM 4 comments:

My Mom, The Artist 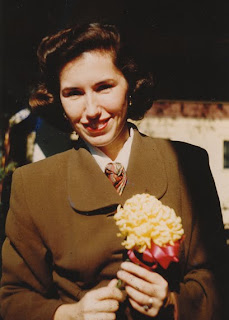 My mother was an artist. You'll never see her work in a gallery or museum, but our home is full of her creations.

She went through periods - as all artists do. At one point it was decoupage, then the "Gold Spray-Paint" era. We'd come home from school and find gold spray-painted wreathes, vases and furniture. I had to hide my favorite dolls - I knew she was lusting to spray them - and we were just damn lucky not to wake up in the morning to find she's sprayed the family members during our sleep. Everything, to her, looked new, rich and wonderful with just a hit from the gold spray-paint can.

"Isn't it beautiful now," she'd exclaim? Some eras are best moved through and then left deeply buried.

The past 20 years or so, stained glass was Mom's passion. She started with simple pieces, and worked her way to intricate designs. When she didn't have a big project to work on, she set about making night lights for everyone she knew. But, Mom was never really about the details. There were a fair number of post-operative installation issues. I still have a beautiful blue bird night light that plugs directly into a wall power outlet. As it only plugs in one direction, the bird is a bit disorienting as he clings to the wall, hanging upside down like a bat.

Some of her more recent works are in her front window. There is the dog who looks a lot like a pit bull. I'd have some problems with this guy, but instead of a vicious killer-dog expression, he's got googly eyes glued on his face. You know the kind - the plastic white dots with black circles that spin around and around when you shake them. Spaced widely apart, he looks like he got into the spiked punch bowl and is stoned out of his mind - permanently stunned and confused. Frankly, exactly the way I like my pit bulls to look!

Then, there is the cat. A big fluffy yellow cat - it has seams across its face that give it a furrowed brow-scowl and green glass eyes that are really ticked off. If it weren't glass, it would jump from its window and claw your couch to shreds just for the fun of it.

Mom's most memorable piece was created during her felt period. Never one to go out and buy something when she could make it herself for less, I recall her painstaking work on a Nativity scene.

Felt figures stood beneath a felt star, taking shelter in a felt stable. Felt Mary and Joseph gazed lovingly upon a little felt manger, in which a felt baby Jesus rested. And, there he was, wrapped in felt swaddling clothes, Jesus was the center of attention. To finish off her creation, Mom cut out a felt round circle and glued it to the shoulders of the babe, then out came her blue pen and Jesus had eyes, a nose, a couple strands of blue ink hair and a goofy crooked grin.

The result was that Jesus looked like a bald 80 year old man who'd tied one on and was laying in that manger, watching the stable spin around him! I mentioned that something was amiss with Jesus, but Mom just smiled that smile of hers and walked off. For years, that felt nativity scene with its old-man drunken Jesus had a prominent place in our holiday home.

As I paw through closets and drawers, closing out Mom's estate, I'm watching for the Nativity Scene. Hopefully someone in the family with a sense of humor will cherish it. 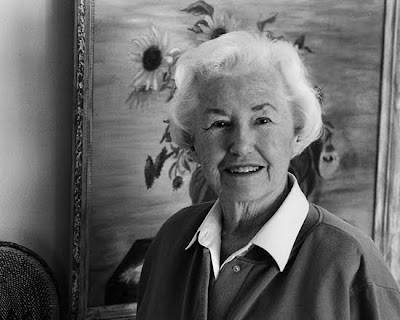 Mom passed peacefully in her home this morning at 11:15, Oswego, KS, time. Her absence leaves a big hole in the lives of her family, friends and the community.
Friends and family are invited to visit www.JanetCarpenter.blogspot.com for more information and to leave comments.
Posted by Karyn Carpenter at 3:21 PM No comments: