Not Enough Bikers in Sturgis 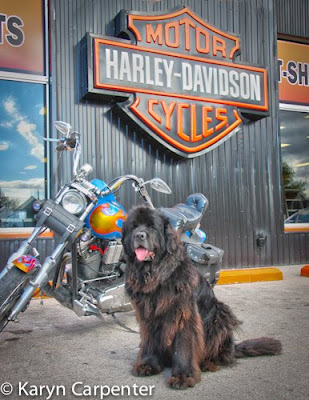 The goal was a photo of Arayo with a biker. You know the kind - a REAL biker. Leather. Lots of facial hair. Heavily lined face from hundreds of hours riding in the sun. A bandana. An eye patch would be a nice touch. And a gold tooth - yeah, that would really make the photograph.

Arayo and I went in to Sturgis as the heat of the day was beginning to wear off a bit. We found the local Harley Store. Several bikes in front. A couple guys came out and got on them - but they looked like insurance salesmen on vacation. Soft around the middle, wearing chinos. Not what I had in mind.

I drove past a couple of bars. Places with names like The Knuckle Saloon and Come In Here and Get Your Teeth Kicked Out Roadhouse (I'm making that last one up…. but you get the idea….) There were few bikes around, but I think that was a computer geek that just came out and drove away on that Goldwing…..

Finally I saw them. They were tough. I swear they just got out of a high security prison yesterday. They looked like they had just finished a lunch of nuts and bolts, chased down with a keg of beer. Leather was all over the place - they were mean and scary. They were women. I didn't have the guts to flag them down and tell them they were the perfect tough guys to pose with my dog. I watched them ride off, wishing I had more backbone.

Some days are like that. If I were a pit-bull photographer - maybe I could just smash into a bar and drag out a good specimen, but I'm a Newfoundland photographer - taking what life hands me and rolling with it in hopes good things will be around the next corner. They usually are.

Photo - Despite the lack of tough looking biker dudes, Arayo posed in front of the Harley store in Sturges. Seeing her posing, the staff invited her in where she found air conditioning, milk bones and 15 minutes of belly rubs from the staff!
Posted by Karyn Carpenter at 9:17 PM