One Week Left to Live 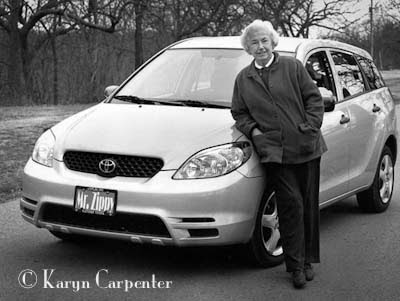 Today, I brought my Mom home to die.

Five years ago she started saying things like "If you get a call that I'm dead, know I wanted it this way."

"Ah, Mom, is there something you aren't telling me?"

Mom's a firm believer in quality of life. If the quality isn't there, its time to check out. So her plan of dealing with the diagnosis of Chronic Lymphocytic Leukemia (CLL) was to ignore it until it got ahead of her and then die. If she could find a way to hurry the process along, then great, but she never quite figured that last piece out.

Two years after diagnosis, she passed out in public and was dragged (under great protest) to the hospital for stitches. Later, the docs who saw her blood levels tried to reach her, and when they couldn't they called the police to break into her home, expecting she was dead, or close to it. Turned out she was out having pizza with a friend, but she was forced to fess up about her health at that point.

Then the family got involved. It looked to me that the treatment for CLL wasn't horribly debilitating so we had a little intervention, with family arriving in Kansas from Washington, California and Arkansas.

I pushed her towards a trial treatment in Houston, which was interesting, if unsuccessful. That ended after we became refugees - evicted into the streets from The MD Anderson Rotary House hotel during Hurricane Ike in September 2008. (But, the Gods were watching out for us as we found long lost family members who invited us to ride the storm out with them. Others were not so lucky.) Treatment transferred back to Kansas after that.

Arayo and I arrived in Oswego in late December and we've been helping her as her body has slowly lost its fight with this disease. Monday afternoon she was walking around, then 2 hours later couldn't stand or walk. Yesterday, her oncologist said we can expect maybe a week left with her.

So today I brought her back to the home she and my father built 60 years ago. The place she loves most in the world. Together we'll see the rest of this journey to its end.

Posted by Karyn Carpenter at 7:55 PM