A Message From Beyond? 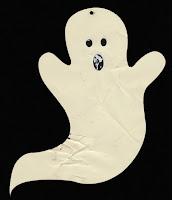 Not in a God, or an almighty being. I don't disbelieve, I just don't think there is an all-powerful director, or judge or giver or taker.

I believe in Magic and I believe in forces outside ourselves - though I'm not so sure we don't create the forces without knowing it.

Years ago I signed up for a class in which the instructor was to explain some of the wonders and questions of our universe. Aliens, the Bermuda Triangle, ghosts and such. It quickly became clear this man was a dud, hell bent on finding any reason to try to explain away every bit of intrigue in the universe. I stopped attending. What an old poop he was.

My second Newfoundland developed cancer. A tumor grew from the base of her nose and out her eye socket. She looked awful but she maintained her will to live. Shortly before she died, I took her to the coast for a few days after Christmas as the beach was where she was the most alive. She loved the water, the feel of the wind in her fur. Though she was slowing down, I tossed sticks several feet into the water for her and my good little water rescue girl would slowly wade out, grab the stick and return it to the safety of the shore.

One day we walked the downtown of a small coastal town, its tinsel and lights still displayed from the Christmas holiday. Eylah wasn't one to pick things up and carry them. Except for the sticks that she would rescue from their watery deaths, I never saw her carry an item around in our 7 1/2 years together.

But, as we walked down this street, she saw a yellow glitter-covered star which had apparently dropped from a Christmas display. Eylah bent down, picked it up and carried it through town. It was as though she was telling me that she knew she had a connection - that soon, she too would be a star. I lost my dear girl within 2 weeks of that day.

Yes, I believe that somehow we receive messages, if only we are aware. The messages may not be life altering but there is magic in them, nonetheless.

This week I am helping my mom die.

This morning, I opened the garage to find a storm had brought with it one simple scrap of what I first thought was trash. When I picked it up to throw it away, I realized it was something else entirely. The little scrap turned out to be a small plastic ghost which must have been blowing around the streets of town for months. I brought the ghost inside, wiped it off and keep it near my computer.

As I watch and care for my Mom through her last days here, I think someone has sent me a message that perhaps, we are not waiting alone.

Posted by Karyn Carpenter at 6:32 PM