Taking on the Confederates 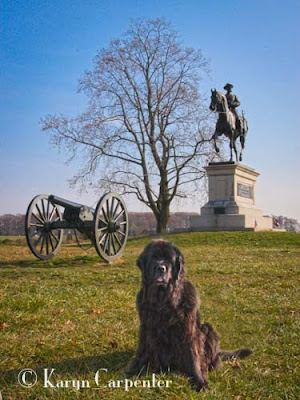 If asked to rate places I'd like to visit, battlefields would be right there at the bottom of the heap. Civil War battlefields, at the bottom of that list. I'm very anti-war. Not that I don't think there are times to stand up for ones rights, but it seems to me that there HAS to be another way to solve problems that don't involve killing each other.

But, our route took us through a little spot on the road where a quaint town opened onto beautiful rolling hillsides. Gettysburg. It stands on its own, as though it needn't be attached to a state - although, it resides in Pennsylvania, in case, like me, you would need to look it up.

"Oh, why not," I said to Arayo. "The least we can do is take a photo of you here with a cannon or something." (And, if she wanted to help water a monument to a dead confederate, then I wasn't going to argue with her.)

Gettysburg - where over 165,000 Americans duked it out, killing 8,000 and injuring 27,000 more. We should be so proud. I know this is part of our history, but pride in all this is just not something I can grasp.

As we make our way further south, the war keeps resurfacing. It is more important here, in the south. No longer is it the "Civil War". It is now "The Woaah of Nawthurn Aggression." (The WHAT!?)

I've been to Tiawan, to China, Africa and even lived in the craziest of all - Sicily - but the deep south of our country is more foreign to me than all these other places. For instance, there is the confederate flag. To me, flying the confederate flag is akin to continuing to fly the Nazi flag. It doesn't really symbolize all that is good and kind in the world. But, some folks down south still love their confederate roots. And, not just those backwoods uneducated, gun-totting, red-necks.

The State of South Carolina proudly flew the Confederate Flag on the State House dome until 2,000 when it was removed to its own flagpole on the House grounds. The NAACP has voted their approval of this fallacious flag flying by declaring an economic boycott of the state and they are joined in this by other civil rights groups. The National Collegiate Athletic Association has banned holding sporting events in the state because of this continued flag presence. But...... the state is apparently standing by their right to fly this symbol of stupidity. They even honor their fallen confederate soldiers each May by giving all state employees a paid holiday in their honor. sigh……

The South is beautiful - some of it REALLY stunning - and I'd like to explore more, but I don't think I'll be packing my bags and moving there anytime soon.
Posted by Karyn Carpenter at 6:56 PM