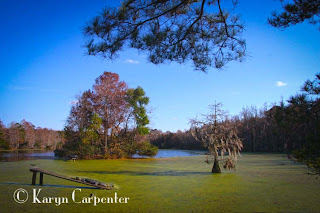 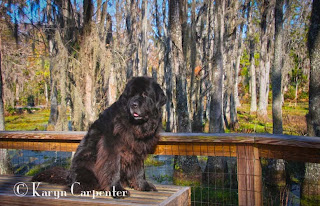 Moss drips from the trees and the water is covered with a green slime that screams of danger. The live kind. The kind you have to be crazy not to be terrified of.

I am terrified, and on high-alert status.

I can hear the snakes discussing amongst themselves that we are on the way. Hissing, sharpening their fangs, and doing little snakie rolls, sit ups, back bends, and knots. Making sure they are flexed and primed so they can grab us when we draw near - then suck us into their green, slimy, watery abyss.

Miz Arayo has that prey drive, so I wrap the leash another time around my hand, keeping her near and watching her every move. If a squirrel dashed past us, she'd bolt after it and rush across the green algae, only to fall through, into the trap laid by the snakes and their evil counterparts, the gators!

A man passes and shows us on the map where he spotted an alligator earlier. While snakes terrify me, Mr. Gator is another thing all together. I'm fascinated by their big teeth, blinky raised eyes and strange crinkly bodies.

I'm reminded of a time years ago. Visiting friends in Louisiana, I headed off in search of an alligator preserve. As dusk was approaching, I found myself on a path, water on either side of me, camera in hand. I hadn't gone far when I stopped for an enormous alligator across my path. I did a little jig of happiness and began documenting this old guy. When I had enough of the "profile, mouth closed" shots, I began talking to him, encouraging him to give me a toothy grin.

He was anti-social, belligerent, refusing to budge. I considered a bit, then decided he could use some encouragement. Besides, a photo of an alligator with his mouth open would be fun! I picked up a rock and tossed it his way. It landed on his snout. He didn't even blink.

I tossed another rock, bigger this time. I got the same result. Nothing.

Realizing I was losing light and needed a tripod for much more shooting, I returned to my car for one. When I came back, probably with the intention of poking the gator with the tripod before mounting my camera on it, he was gone.

Not until returning to my friend's home did I learn that gators are fast and not necessarily known for their tolerance of dopey women who throw rocks at their heads. The gator I found must have been brain damaged - or assumed i was. It gave me a break and didn't eat me that evening. Somewhere in my files, I have slides of this big old gator's head with a dozen or so rocks on his nose. My future as a wildlife photographer left something to be desired - but I was probably lucky I was allowed to have a future at all!

Photos: The only gator in view was perched far into a slimy green lake - no doubt he was a decoy for others lurking nearby. Miz Arayo poses from a secure bench - unaware of the danger lurking below and beyond.

Posted by Karyn Carpenter at 2:42 PM