Vigil for a Gentle Giant 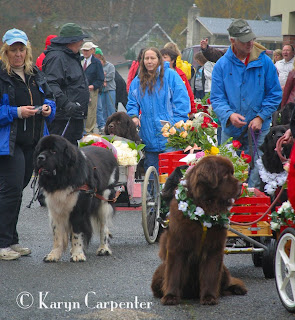 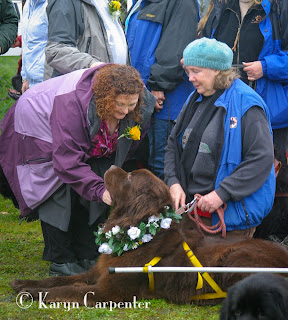 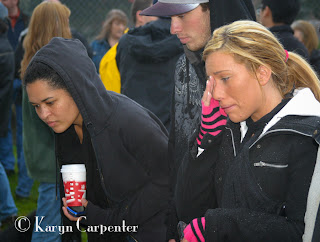 Gray skies added gentle rain to the tears that fell from the members of the small procession. Pulling carts filled with flowers, Newfoundland and Saint Bernard dogs were led down the street in quiet observation of the murder that had only a week ago stunned the community.

Cars honked or pulled over in respect as the procession made its way to the simple home who's gates, today, were open. One by one, the quiet group filed into the large front yard and came to rest in line. Dogs, carts, flowers and stunned, saddened people…..

It was a week ago that police hunted down a gentle 115 pound Newfoundland Dog named Rosie. Those studying the events of the case, who read the police report and heard from the owner of the yard into which the dog fled, knew that this was nothing short of murder. People drove in from Canada, Oregon and Washington to pay their respects and to say to the city and the world that this should not be an event that is tolerated in this country.

One by one, the dogs pulled their carts to a fence where a small memorial of flowers had already begun. Roses, cards, balloons and posters were laid on this fence - which only a week ago had been Rosie's last hope for safety from her pursuers. The flowers, sent from all over the world, framed the deep back yard and the blackberry bushes where Rosie hid during her final minutes of terror.

Rosie's owners read a short statement, then walked along the group of dogs, stopping to kiss each large, gentle, canine head and hug those who had come to support them. As a final goodbye, they parted the gates to the back yard and walked to the place, far in the back which was marked with yellow roses. The place where Rosie tried to hide from the marksmen who took her life.

Posted by Karyn Carpenter at 7:50 PM