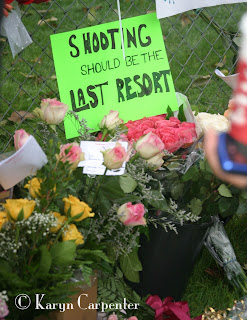 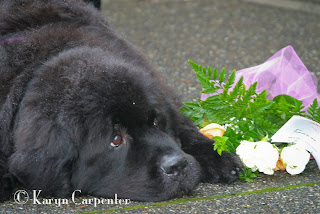 Again, I post on the senseless murder of the Newfoundland dog, Rosie, in Des Moines, WA. This past Sunday, I joined a group of about 100 people who came to express sorrow and outrage at this awful event. We represented thousands of others from around the planet who were unable to be there in person, but who participated in spirit by lighting candles and continue to post online of the anger and tears that this atrocity has produced. People drove in from Oregon and Canada to attend the event, and local media were in attendance, including crews from two of the three major television stations.

It was felt that the best way to express our outrage was to do it in the gentle fashion of our dogs, with quiet dignity and respect - though most of us wanted to find the murdering police officers and show them the same compassion that they exhibited in hunting down, traumatizing and finally murdering this poor scared dog.

In studying this case it is evident this event is not isolated. That across the country, people are losing their beloved family pets to the hands of police officers who are sworn to serve and protect. How barging into a secured, fenced yard and shooting an animal that has been cowering far from you in blackberry bushes - - a dog who has been there for 20 minutes or so and has not moved a muscle it is so traumatized because of what you have done to it previously - is unconscionable.

That one of the officers involved could laugh, wipe his hands in a symbol of "job well done" and tell the owner of the home where this event took place that "this was the biggest one we've ever gotten!" shows a callousness and disrespect for life - both human and animal - that is truly frightening. That this individual continues to hold a job as a police officer and that he is allowed to carry a gun should strike fear into each and every American.

The Newfoundland Clubs of America, and of Seattle, the Humane Society and at least one, hopefully more, animal rights groups are watching this situation and continuing to apply pressure to the city of Des Moines. An on-line petition has been established with a goal of receiving over 4,000 signatures by this Thursday when they will be printed and hand delivered to the Des Moines city council. Everyone is encouraged to add their name to this document and to send e-mails to the city council, mayor and police of Des Moines demanding that the officers involved in this event be held responsible for this murder.

The Des Moines mayor attended Sunday's vigil and said that they have received over 1,000 e-mails from all over the world, so they know that this a case that has created a great deal of passion and upset. We need to keep the pressure on and I beg people to become involved. If this is allowed to pass without the officers receiving very severe repercussions, it opens the door for similar events to take place - and the next dog who is let out of its fence by a careless delivery person, or children who are intrigued by a big dog and want to play with it - could be yours.

As we drove home from Sunday's vigil, we spotted a dog who was dashing through 4 lanes of freeway traffic, dodging cars blowing down the road at 70 miles per hour. The dog was dragging his leash behind him. We will never know how this dog broke away from its owner and ended up in the freeway. We pulled our car over and tried to stop traffic and catch the dog, but it turned and ran away from us and managed to escape to an area we could not reach and which was hopefully a bit safer for it.

It was with a heavy heart that we drove off, leaving the dog to his own fate. We hope it ran back into the arms of his loving family, but there was absolutely no suggestion of calling 911 to send "professional" help to capture and make the dog safe. It seemed more humane to allow the dog to take its chances with freeway traffic than to subject it to the possibility of a police response and it being made a target for another Sunday shooting.

Please, take a moment and sign this petition today - http://www.thepetitionsite.com/1/rosie-the-newfoundland-shot-by-police/

Write the city officials, including the major at ……… http://www.desmoineswa.gov/

Help us gain attention of national media of this event as this is a national problem, not a single isolated incident. How about 60 Minutes? http://www.cbsnews.com/htdocs/feedback/fb_news_form.shtml?tag=ftr

This is a blog post written by Brian Hodges, a lawyer and Newfoundland lover. He eloquently addresses the very dark side of this concern. This is a must read! http://plf.typepad.com/plf/2010/11/a-boy-and-a-dog-a-cautionary-tale.html

If you are associated with any organization, an all breed dog club, a Veterinarian association, animal groomers group - ANYTHING - please educate yourself about this horrible event and ask your organization to take an official stand. We can not condone this kind of action taking place in our country.

Posted by Karyn Carpenter at 7:58 PM