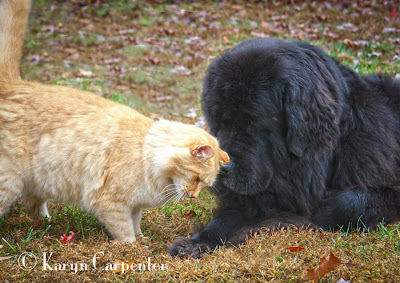 His name is Bob.  Covered with fuzzy blonde hair, his broken left ear - crunched over at an odd angle - gives him an air of jaunty personality.  But he is a cat.  Just a fluffy old stray that showed up one day and decided to stick around where the food was good.

He lives outside and for the most part, does what cats do. He hunts mice and drops their carcasses, and squirrel entrails at the front door - gifts to those who live inside.

Today, Bob has another 100 pounds of Newfoundland arriving. Arayo is in town. Arayo - the one with the high prey drive. The one from who's jaws I've removed 2 cats. Fortunately for the cats - removed unharmed. I saw a bumper sticker recently that was made for Arayo. It read "I LIKE CAT'S TOO! WANT TO EXCHANGE RECIPES?" That's Arayo and cats........

We get out of our car and Bob comes running. He wants to meet the new dog. To rub against her. Weave between her legs. Jump up, place his paws on Arayo's face and nuzzle her nose. Bob seems like such a sweet cat, so I swallow and wait for what will come next.

Apparently he knows what he's doing. He's a pro, ole Bob is. Perhaps seducing all the other dogs he's met before were just preparing him for this moment - charming Arayo - - the cat eating Newf!

And, charm Arayo he did. Charmed Arayo's cranky, kinda "not so thrilled about cats" owner, too. We both took to Bob. But he still leaves those body parts at the front door………….
Posted by Karyn Carpenter at 7:15 PM