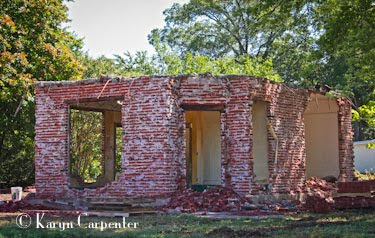 "Say," I commented to the group of women seated around the tables, "let's go picket! Maybe we could throw ourselves in front of some big equipment. Since the police department is just next door, I bet they'd come over and take us off to the pokey! Lori, would you deliver pie to the jail if we all got tossed in the clink?"

Lori was up for making a jail-house delivery for a good cause, but still the mostly gray haired ladies at the table nodded with a bit of - well, reluctance. I wasn't sure if the nods signified an agreement to my comments or if it was a way of signaling each other "Karyn seems to have lost it. Don't antagonize her….."

"We've got the local newspaper editor here - she could get us coverage," I continued. "We'd really get some attention if the entire Thursday Pie Day group went to jail for the cause." (Besides, I'm thinking, most of us are well into our retirement years or getting close. Grandmothers, great-grandmothers - women with a mission! It would play well to the media. I was liking this idea better all the time.)

The cause, of course, was the destruction of the little 100 year old brick building that was being torn down to benefit one of the churches in town. Seemed that most everyone had a lump in their throat over the sacrificing of this little building, but the dismantling continued piece by piece.

My friend, Pat, was psychologically, if not physically, trying to move from my side to the other end of the table. As the only Methodist in the group, it was her church that was gaining a breezeway over the murder of the small defenseless building. While I didn't blame her - she didn't even know about the issue until walking into our Thursday noon Pie Day gathering - she still felt a bit on the spot over my rantings and the concerns being expressed by others at the table. But, I knew she could shoulder it. She was, after all, an open Democrat in an extremely Republican state.

In the end, the women headed for home; my attempts at organizing a vigilante picketing group having met the same fate as the small building. It was just me playing to a conservative audience, and truth be told, we probably couldn't have stopped the destruction of the little building anyway.

Though, had I gone out and laid down in front of the trucks and sledgehammers and managed to get a night or two in jail - I did have a couple women offer to bring me a home cooked meal. If only they could have snuck in Arayo, too.

Posted by Karyn Carpenter at 9:31 AM