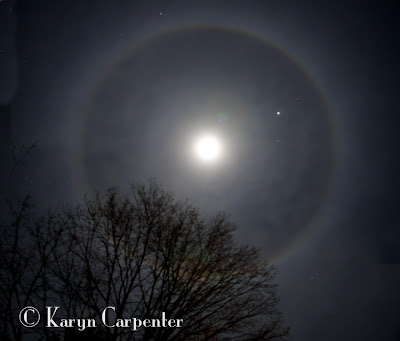 My heart pounded as I fought my way though the night. Trees reached out, their long fingers stretching to grab my clothes and slap my face.  The beam of my tiny flashlight was no match for the darkness - illuminating the downed limbs across my path only seconds before my feet tripped over them.

I looked over my shoulder towards the dim light of the house that receded as I pushed through forest underbrush.   I fought the urge to turn around:  what was I doing in these strange woods, alone, in the middle of the night?

My thoughts were pierced by a creature's cries of terror and I focused again on the faint glow in the distance - further into the trees.

"I'm trying," I shouted into the night, and I pushed aside another limb and further into the darkness.

My mind flashed to movies featuring people are lost forever in unknown woods - I continued to try to make my way towards my friend's light.  I choked down images of what may lie beneath the brown leaves at my feet.  Snakes.  Poisonous snakes.  My sandaled feet would not withstand a snake attack, yet I pushed aside another branch and continued on.

Suddenly, the ground dropped and my little light caught the reflection of water below me.  I'd come to the edge of a gully, still holding water from the rains of earlier this week.   I moved to my right as my friend called for help yet again.

"NO! I need you!" came the replay.  My pleas for direction were answered only by the sounds of another mournful wail.

Finally, I reached the scene of distress.

Suzi's light was joined by another and as I played my tiny beam over the scene I saw her below me, standing in inches of muck and water, holding onto a fence that crossed the stream which divided her property from her neighbor's.  Her Newfoundland, Tess, had found her way through a small hole in the fence and was focused on the tiny, frightened bundle that Suzi was passing up the hill to the safety of other neighbors who had heard the night's cries.

The dark eyes and alert ears of a  fawn peeked out from the folds of a blanket in the woman's arms.

With storms raging through the midwest, the rising waters of the stream must have swept the fawn in its current and trapped it between the property fence and other debris.  Too young to free itself, the terrified deer cried for help, which arrived initially in the form of a 120 pound dog who thought she'd found a new playmate, or a toy.  Knowing the sound of a fawn in danger and unable to locate Tess, Suzi headed into the night to retrieve her dog, and free the fawn from its snare.

Unfamiliar with the woods, I arrived too late to be of help, but suffer the indignities of numerous bites from blood-sucking ticks who hitched a ride on my journey though the forest and followed me home to bed.  Evil bastards!
Posted by Karyn Carpenter at 4:09 PM