Venturing Into The Kitchen

"Karyn is a culinary diva," is a comment you will never hear, unless, of course, there is another Karyn being discussed.  Ain't gonna happen.

"Karyn sure can balance a check book" or "Karyn certainly loves her dog" - any number of other opinions can be bantered about.   But even at my memorial service - where people might feel the need to say something nice  - you know, rather than risking a visit from "Karyn, The Angry Ghost" - no one would stretch the truth so far as to venture a positive view of my cooking.

I feel I come about this honestly.  My mother kept us fed, but cooking wasn't her deal either.  There was the "toss a can of baked beans in a casserole dish, open a can of spam, cut it into 5 or 6 slices, arrange spam on top of the beans, pop in the oven, heat and serve" meal.  Or the ever popular and a bit more complicated "combine cream of chicken soup, a package of frozen broccoli, a can of tuna, pop in a bowl, sprinkle top with crushed potato chips and heat" dish. Yum!

I'm such an uninspired cook that I lived for several years without an oven.  The second-hand one that I bought lasted for about an hour and then died, so I lived without for the next 3 years.  And, now I'm at my mother's house and, well - lets say her stove/oven is less than state of the art.  In fact, it is so tired that when the oven door opens, it screeches.  Dogs across town howl it is so horrible.  But, I don't feel the need to replace it.  It isn't like opening it is a daily occurrence.

But yesterday I hit an all-time low.  I got inspired by my nephew's girlfriend's blog to make a coffee cake she'd featured.  I do love a good coffee cake and this one - a two layer "Gooey Cinnamon Walnut Coffee Cake", with cream cheese frosting between the layers and cinnamon glaze on top, looked like heaven.

So, I went to work.  I combined ingredients.  I even pulled out and used the electric mixer. (The one that has the mixing paddles that have, over the years, managed to imbed themselves into the holes of the machine and refuse to be removed - - it is probably better that none of us knows WHY they will not come out!)

It looked like this was going to be a successful experiment when I decided to check the oven before turning it on to see what I might be storing in there that might melt.  The door wouldn't open. Not an inch. I think it was rebelling - assuming I was once again going to put into its chamber a concoction it would be ashamed to have played a part in constructing. 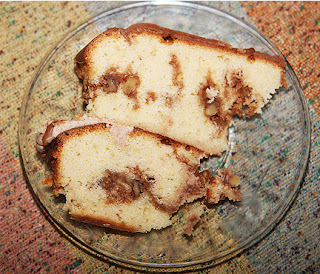 With my foot planted firmly against the base of the thing, I gave the door a good yank - sending the salt and pepper shakers that sit atop it flying across the room.  A few more pops and it was obvious that I couldn't even break the door down.  I  pondered tools.  Now, the only thing worse around here than my mother's cooking utensils and appliances would be my dad's tools.  I found a hammer and a screw driver that had been used to stir paint at one time.  The handle is loaded with icky green but flaking paint, some handle guardy thing spins in circles and usually rests near the flat end of the tool - unable to escape but certainly in the way during most projects.

Armed with two next to worthless instruments, I returned to the oven and gave it a lecture about behaving as Arayo decided that now was a good time to head for safety.  I managed to pull the door out about 1/4 of an inch and inserted the screwdriver into the crack, pushing against anything that might be in the way.

Nothing.  The door wouldn't budge.

I tried again, working at it gently, then bashing the driver into the crack while I yanked as hard as I could. By golly - I wasn't going to be beat in my  drive to bake this cake by a cantankerous oven……

Then, finally, the oven cried Uncle and with a loud scream and howling from the neighborhood dogs, the door opened!  I'd won!

The cake turned out great, if I do say so myself.  Though, mine isn't a beauty to behold, it is sturdy!  I took a hunk of it to a friend who dropped it on the sidewalk and it bounced - didn't break up or crumble a bit!  She can serve it to her husband for breakfast and, unless a piece of gravel falls out - he won't be the wiser.  I'm not sure what that says about my experiment into baking, but I got that out of my system for the year!  Next year - who knows what I'll attempt.

For those of you interested in following Katie's  baking blog - check it out!  We adore Katie and her creations are an inspiration!  What Katie's Baking
Posted by Karyn Carpenter at 8:17 PM