The man needed an accomplice, so he approached one of us.  Perhaps his mistake was not doing a background check on the group she was with but he needed to act quickly and quietly.   He'd thought everything else through.  The time, the location, the ring.  All he needed was someone to record this - the biggest moment of his life.
But, he asked one of us to hold the camera and document this event.  With the camera running, he led his special someone to a canopy created with hundreds of white lights.  He peered into her face, then dropped to one knee and produced a small box containing the glittering symbol of a thousand dreams.
Our rag-tag group surrounded the couple as he asked her to spend the rest of her life with him, and the romantic moment was transformed to a sporting event.  We cheered his actions, we clapped, then someone realized we didn't know her answer so we loudly called out, as though it was our right to know her response.  We'd suddenly taken a vested interest in the outcome of this moment.  She nodded, and responded yes, and as he stood and slipped the ring on her finger, we applauded, then asked to be invited to the wedding! 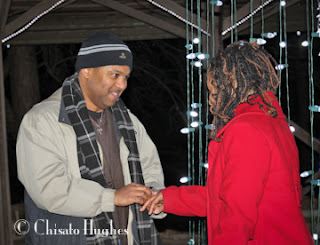 My uncle then pulled from his pocket the ultimate engagement gift.  A round chocolate-covered brownie he had purloined at my aunt's memorial earlier in the day.  He'd been bringing it out of his pocket for the past seven hours to gloat about possessing the once appealing treat, but this time, he unwrapped the decaying prize from its shredded paper napkin and offered it to the couple.  With grace, they accepted it, although it was like the gutted squirrel that is offered to a human by the family cat.
Returning to the paths and twinkling lights of Garvan Gardens, the night seemed brighter, the cold less biting.  Whoever you are, we wish you years and years of happiness.  We were thrilled to spend such a special moment with you.
(Thank you to my niece Chisa Hughes for sharing the great photographs!)
Posted by Karyn Carpenter at 11:25 AM