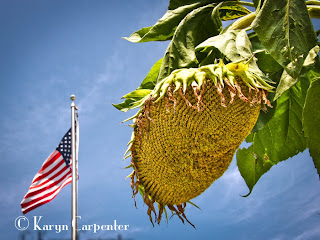 As the country observes the anniversary of the horrors that took place 10 years ago, I considered joining the many who listened to the radio or watched the tv coverage of memorial events. A quick 10 minutes of listening to Presidents, past and present, expound on those who murdered, those who died and those who continue to sacrifice to make sure this will never happen again - and I was finished. It was time to reflect in my own manner.

I vividly recall where I was the day the Twin Towers came down. It was early morning and I happened to get up and turn on the tv to watch the day's news. What I saw was the coverage of the events back east. The towers were still standing but it was obvious that what was taking place was an attack on this country. "Where will they strike next?" the country wondered, as reports continued to leak about planes striking the Pentagon, a field in Pennsylvania and rumors of more were bantered around.

Personally, this would be the day I knew that my 9 year marriage was over. I had been struggling to keep a relationship alive with a man who was fundamentally unhappy. As I sat with him and watched people jumping from windows and the towers eventually falling before our eyes, I realized that there was more broken than our marriage as he was totally unaffected to the day's horrors. If he could not hold compassion for the thousands of suffering people that day, then it was okay for me to stop trying to make this work. Major life events seem to do that to people. They re-evaluate. They work to draw family and friends to them or move to clean up what doesn't work in their lives.

So, today, rather than listen to Presidents tell me what I should think and feel about that September day so many years ago, I chose to look at old footage of the events. To watch interviews of people who's lives changed that day. To morn for the individuals lost, for their families and for the shift that took place in our country.

I contemplate the really amazing things that came out of 9/11. The individuals who came forward to offer shelter, food, clothing, friendship, and compassion to total strangers. I recall how the majority of the world reached out to America - how they joined with us in our pain. For those who saw the terrorists as heros, I ask "why?" and wonder what we as a nation may have done or are doing to produce such hate.

I contemplate the rights we Americans have lost in the past 10 years as our leaders scream messages of fear, and I morn for the wars we are now engaged in. For the innocent people and our youth who are dying for……. what?

There is no excuse for the events of 9/11 but as I watch the replaying of the towers falling, I realize that more than steel and the lives of 3,000 people were lost that day. With the crumbling of the towers and the crashing of the planes, the entire structure of America fell - or, perhaps was exposed - and we suffer our responses.

Posted by Karyn Carpenter at 12:20 PM