Of Delight and Terror 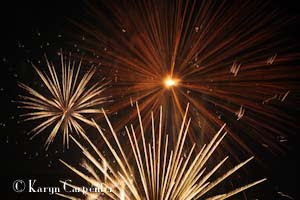 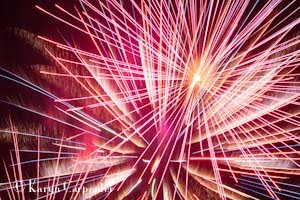 "Excuse me, ma'am. I'll have to ask you to keep out of this area. We've got explosives set up over here."

Oh, be still my heart! This has to be one of those phrases that just makes my heart skip a beat. Kind of like "A tornado was just spotted a mile away. Jump in my tank and let's go chase it!" Personally, I'm just living to hear someone whisper THOSE words to me.

For some people, its "Come on over - I just bought a cheesecake (or a puppy)." For others it might be "Hey, fella - I gotta hooker in the car and she is disease free!"

I wasn't looking for a charge when I approached the man at the park. I knew they were going to shoot fireworks off from the end of the bluff later in the evening, and I wanted to know how close I could get so I would have the best view for photographing them. I just had never considered the fact that they might be considered explosives.

Interesting the things that get some people all excited. Who'd a thought I'd go all gushy over tractors until I got to drive one? And this thing about storms….. I always wanted to ride out a hurricane until my mom and I were in hurricane Earl a few years ago in Texas. We slept right through it . Now that continues to be on my bucket list, with the stipulation that I stay wake through the thing! (And for those of you know know me - yes, I'm still terrified of freeways, tall bridges, setting foot on airplanes and snakes. There is no logic to one's list of thrills and terrors.)

So, last night, I took Arayo with me to a little campground that rests on the side of the Neosho river. As a child I recall seeing lots of water moccasins along this river, so you know I wanted to photograph the fireworks in the worst way! It was a straight shot over to the point where the "explosives" were set up so the view was sure to be spectacular. As we waited, Arayo and I sat under the stars and marveled at how there could be lightening flashes all around us and not a cloud in the sky. We relished the cool breezes playing on skin and fur. (It was still 90 degrees -- but after weeks of over 100, it felt cool at the time.)

As the fireworks display began, I put Arayo back in the car to protect her. I'd rather have held her, she is so terrified of loud noises any more, but I knew I couldn't photograph and hug her, too. At the end of the display, I opened the back of my Subaru to put tripod and cameras away, and noticed………. Nothing. No 100 pound black dog. I called to her. No movement or sound. I began to panic. I'd left the windows open about 8 inches each - was it possible she could have squeezed herself through one of them?

Finally, I found her. She'd moved to the front passenger seat and attempted to crawl under the car by way of the footwell. Poor Arayo. She does not understand why we have come to this place called Kansas. All spring it was thunderstorm after thunderstorm, and this July there have been 3 nights of fireworks. The world has simply gone mad.

(Note - For those of you who question why I took Arayo to watch the fireworks rather than leaving her home - it was a judgement call. The noise would be as loud at the house as at the park - I figured she would be alone much less time if I had her with me. Why did I put her in the car when the fireworks began? Outside the car she would have been tied to a picnic table - which she would have dragged through a corn field when the explosives began. The car is a place where she feels secure - like a big dog crate - and because I'd been running the air conditioner earlier, it was cooler in the car than out.)

Posted by Karyn Carpenter at 10:48 AM