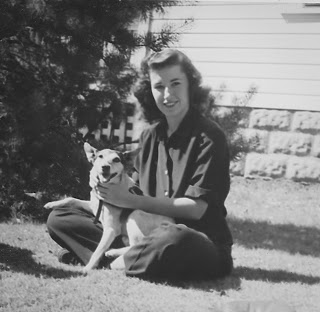 Dark clouds threatened as my group drove to set up for my mother's memorial. As we reached the park entrance, the sight of multiple American flags flying from lamp posts greeted us and a lump raised to my throat. I knew they were flying to honor my mom - a woman who, in her quiet way, worked 60 years to better little pieces of this community. Her true passion was this park, sitting atop a bluff overlooking a river and the farmland below, where, today, we were going to pay final tribute to her life.

It was kind of a freaky idea - not something these traditional, conservative Kansan's were used to - but I wanted to hold off to say these public goodbyes to my mother. 4 months would give me time to plan something fitting and to get some distance from the pain of her loss. It also gave family and friends time to learn about her passing and to plan a trip home. Best of all, it gave the park time to rise from the dead of winter. For leaves to grace the trees and flowers to shine from their beds.

I planned the event for morning to beat the ghastly Kansas summer heat - the seating area dictated by the shade of trees. My crazy friend, Sondra Torchia, who does one-woman historical performances, mc'd the event and others joined to tell their stories of the woman I called Mom. Our family created the "Missing Janet Chorus" and sang one of Mom's favorite songs - made popular by the Muppets called "Something's Missing", and by the time the hour-long program was over, people were saying "when I die, I want a send-off just like Janet had!"

Because I've had people ask for some of the details of the event, I'm listing them below and later I'll add the stories I shared - more of the funny light-hearted stories about Mom that most people probably didn't know.

Today marks 4 months that Mom has been gone. It seems like yesterday and the hole in my life isn't getting smaller with time, but she died on her terms without pain and suffering. I have no regrets.