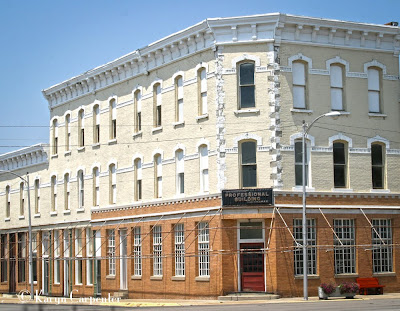 "Here is where my classmate lived. She shot herself the night before our prom - but no one in our class believed it. There were always other theories, but suicide was the official story.

"On the left is a new bank. There was once a beautiful old two story building there that held a grocery store. One evening, just as the owner locked up and got in his car, the entire outer wall crumbled and fell. No one was killed, but that was the end of that building!"

Friends had called to say they were driving from Florida to Seattle and were planning to visit me in my home town in southeast Kansas. Now, anyone who has grown up on a small community knows that part of your heritage is knowing the ins and outs of what has gone before, and without realizing it - the tour my friends got was - well, perhaps, somewhat macabre.

"One day I was going to school and I heard a horrible sound on the highway a block away. I rushed over to the road and found friends there with shocked looks on their faces. They pointed to an 18-wheeler stopped half a block away and said 'our next door neighbor……. He came out of his house and jumped in front of that truck and it ran over him!' I walked to the truck and, sure enough, there were legs sticking out from under the tires. It happened right here, a block from my house!"

"When I was young, one night my mom came in it and woke me up. It was pouring down rain, but she insisted there was something I needed to see. She drove us the 3 blocks to downtown and, there was the town, all lit up! Lightening had struck one of the buildings and a third of a block in the downtown core was on fire. As firemen worked to control the blaze, half the town showed up in their pajamas to stand on the other side of the street to watch the town burn. I remember people praying the donut shop didn't catch on fire, and finally, the water stopped pumping. Someone had forgotten to turn the water on at the pump house to refill the water tower and they ran out of water. Fortunately, we only lost 3 buildings that night.

"That three story brown building was once the home of the largest mortgage company west of the Mississippi. I don't know what happened to the company, but the building has been kind of neglected in the past few years. Story goes that it sold at auction for $1,000 a few years ago. Someone put in a starting bid and when no-one bid against them, they found themselves owner of a prominent piece of main street. Rumor has it that they finally sold the building on eBay to someone from out of state for something like $8,000. Last year, the entire back of the building caved in. Now, it just sits there. Half rubble."

"Gee," said my friend. "This is a fascinating tour, I'm going to call it the Disaster Tour!"

Hum….. Sometimes you can know almost too much about a place.