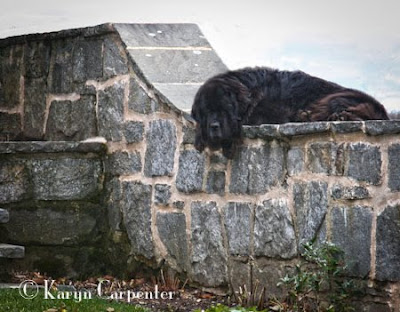 Santa dropped by for a Newfie fix this week.

It was a beautiful day so I spent a few hours cleaning the dust of many miles of travel from my car. He approached quietly. I suppose he had a lot of practice from sneaking around people's homes at night - but I turned around and there was his bright red Chevy sedan parked in the driveway behind me. When he stepped from the car, there was no mistaking the big jolly lad. His funny red Santa hat was replaced for the off-season with a red and white "Oswego Indians" ball cap, and in place of his fur trimmed suit were a red t-shirt, red windbreaker, and red polyester pants held up by blue and white stripped suspenders. His face was hidden behind a beard and as a disguise - his little round spectacles were replaced by big nondescript glasses. Didn't work. I knew who he was.

He hadn't dropped by to see me, though. As always, when you own a Newf, you know that the people who stop really just want to see your dog.

"I used to have a Newfoundland," Santa proclaimed proudly as he bent over to scratch the belly that Arayo had immediately dropped to the ground to offer up. The story goes that some years ago a friend had a litter of Newfs. This one had a nose that was too short (breeders wanted long-nosed newts, you see) and the breeder offered to give this pup to Santa, who happily accepted. Santa had an office in these days, and figured he'd better take this a step at a time. He left the puppy at his office at night, and went home to the missus and said, "Don't you think we need a dog?" To which the answer, night after night, was always, "No!"

After a few weeks of this, he figured this was a no-go deal with the wife and offered him up to the police department, who's office was next to his. They thought he'd make a big scary police dog and snatched him up for their program. (Of course, that same night, Santa went home and Mrs Santa proclaimed "I think we need a dog, don't you?" but by then it was too late.)

Well, some time later, the police come back to Santa and say "want your dog back?" Turns out there are reasons that police departments all over the world don't have attack Newfs on their force. Seems they could train the dog to chase down a bad guy. Could even get him to knock the guy down and pin him to the ground. What they couldn't get through to the dog is that you do not lick the bad-guy's face while waiting for the back-up of your fellow officers.

Santa had his Newf back.

Then, Santa proceeds to tell me the rest of the story. One day this guy is driving down the street. He's in a hurry, driving too fast, and he sees this big black form in the middle of the road. He hits the brakes but can't miss hitting Santa's dog. The dog died protecting two kids who were in the street.

So, that's Santa's Newf Story. I'm glad Santa only visits children one night a year and does it with a very busy schedule. His story was charming but he needs to work on happier endings.

Posted by Karyn Carpenter at 9:32 AM