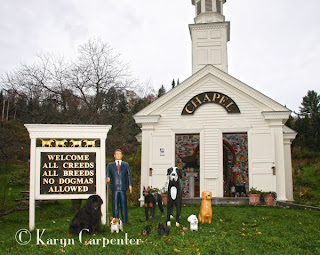 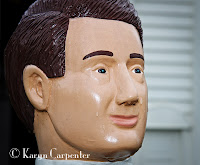 A teardrop slides down his face. A dignified man wearing a suit and tie, he holds a leash with a small brown and white mutt at the end. And he cries. On this beautiful hillside in Vermont, surrounded by fall colors, a small chapel and six other dogs of various sizes and breeds, the beauty and the serenity can't stop the tears.

The man wasn't created to depict such sadness. He is a statue, crafted and placed in this setting to highlight the bond we have with our four-legged friends. But, today, at the Chapel on Dog Mountain, the heavens have a different message for us. Today, as gentle rain falls, the man weeps. Most people passing by are unaware of the pain of this man, but for those who take the time and look deeper, we are reminded of the complexities and frailties that connect so many of us.

For, it was only nine months ago that the creator of Dog Mountain, the man who crafted the Chapel and the artwork, took his life.

Stephen Huneck's life was full of promise, of talent, of hardship and compassion. A solitary man for much of his life, he knew poverty and overcame unbelievable challenges. Following a fall that resulted in a coma and a subsequent condition in which he had to relearn everything from walking to writing, Stephen vowed to build a memorial where people could celebrate their connection with their dogs. Today, visitors from around the world visit the tiny building. They sit on pews which are supported by beautifully carved canine ushers. Light filters through stained glass windows, each depicting a dog and proclaiming the lessons they teach us; trust, friendship, love, joy, play, loyalty. And, covering the walls, are thousands of notes and photos of animals who have touched the lives of those who have visited.

But, Stephen didn't stop there. On his property he built a playground where people can enhance the bond with their current pets. There are trails for walking, ponds for swimming, an agility course to play on. Twice a year he, his wife and staff held Dog Parties, attended by hundreds of dogs and their owners.

With several books and a thriving business selling sculptures, wood cuts, furniture, shirts and cards, most featuring dogs, Stephen appeared to have overcome the challenges life had sent his way. But, Stephen also shouldered responsibility. He had staff and families depending on him. With the downturn in the economy, he was forced to look seriously at cutting staff in order to pay his own bills.

On January 7, the responsibilities became too difficult and he put a gun to his head.

Today, as the man in front of the chapel cries, visitors stop at a new remembrance wall and view notes and photos of Stephen Huneck. And ponder not only the bond we have with our animals, but the ever fragile connection we have with this life and with others who share this planet.

One of Stephen's woodcut prints depicts a labrador retriever. It is swimming in rough waters and tows a boat named "Friendship" in which three other labs ride. Stephen apparently felt his swim was too long, the waves and the currents too high. Somehow, the world missed the signs that this man of talent and compassion was in need of a lifeline.
Posted by Karyn Carpenter at 11:43 AM