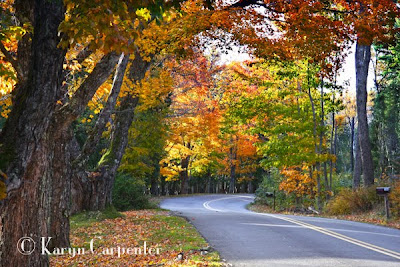 The road stretches before us as we head towards Maine. Leaves, in dull shades of orange and gold, slowly release their grasp on branches and float softly to the ground. The colors are a slight disappointment, as the rains, the cold and wind have combined to tone the traditionally vivid Vermont countryside to an understated version of the season.

Into upper New Hampshire and across southern Maine, nature has stepped forward with more self assurance. The trees wear their colors in a fresh, bold pallet.

Arayo and I drive the winding side roads, accompanied by the music of Cheryl Wheeler, an absolutely amazing artist I've been introduced to. Her ballads of love, loss, Fall in New England, and funny tunes bemoaning cell phones and air travel are the perfect backdrop for our journey and I'm so thankful to have found her!

We head to the coast, and eventually to a small island that lays 20 minutes to the east of the mainland. Islesboro, with areas named Pripet and Dark Harbor, was originally called Pitaubegwimenahanuk by the Penobscot Indians. Some name changes are definitely an improvement.

Following the Civil War, the island was discovered by the wealthy who were looking for a cooler place to spend their summers and giant homes were built along the shoreline.

These "Single Family Summer Cottages" are in use a couple months of the year and have been owned by the likes of J.P. Morgan, Kirstie Alley and John Travolta.

Arayo and I plan to spend some time here watching for the rich and famous.

Posted by Karyn Carpenter at 6:24 AM