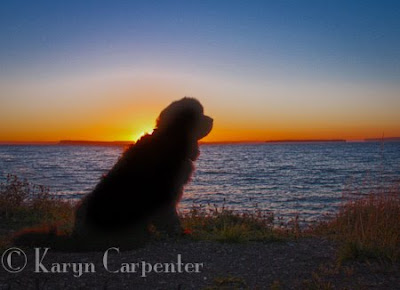 As many in the world reflect on the horrible events of September 11, 2001, it is fitting that I should find myself in Gander Newfoundland this 9th Anniversary of the tragedy. For, perhaps some of the most moving accounts of the events following the hours of that day center around the town of Gander.

At one time the Gander airport was the largest in the world, as its location was crucial for refueling flights and staging those headed to Europe during the war. It continued to play a key role in travel until airlines with extended flying ranges were built and the need for a refueling point ceased for most flights.

With 200 aircraft over the Atlantic when the World Trade Center was hit, pilots were directed to land all aircraft immediately and to, as much as possible, avoid landing in large cities. So, the small town of Gander, with a population of 10,000, found itself with 39 aircraft and 7,000 frightened souls on its runways.

The people of Gander responded quickly and with open hearts. They set up shelters in schools, churches and any other place they could. They cooked for them, opened their homes so people could have a bed and allowed strangers to come to their homes for showers and a cup of coffee. They gave them clothing, loaned them vehicles, and sat and held the hands of those who had loved ones who might have been killed.

Several years ago I read a truly fabulous book about this event. Written by Jim Defede it is called "The Day The World Came To Town: 9/11 in Gander, Newfoundland". Unfortunately, it is one that my home library no longer has. A pity as it is well written, fascinating, and a real feel-good book. Worth picking up on Amazon or someplace!

As I continue my journey, finding myself so often in the company of and in the care of strangers - it is good to remember that, while the events of 9/11 are horrific, the positive is the way the world opened its arms and showed that we are, in many ways, all related.
Posted by Karyn Carpenter at 7:28 AM