Everyone Said You MUST Take This Drive...... 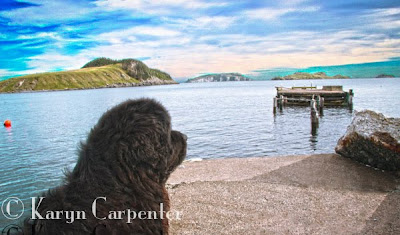 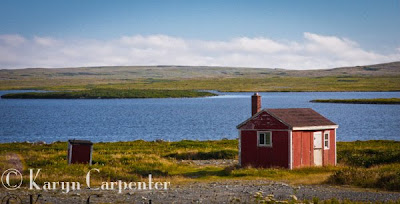 To drive the loop known as the Irish Coast would take 3 hours, maybe a bit more. So they said. So, with about 3 1/2 hours until darkness, Arayo and I headed towards the coastal drive, named for the people who initially settled it.

A series of small islands scattered just off shore at the beginning of the drive caused me to turn the car around and return for a few photos, then we quickly continued our southern journey. I noticed that towns were becoming further and further apart. I glanced a concerned eye at my gas gauge, another at my map. The landscape was beginning to remind me more of Western Kansas with every mile we drove. Flat. Nearly empty.

The sun was getting lower in the sky and I'd not yet reached what appeared to be the halfway point. The dwellings I passed resembled double outhouses more than homes. No cars were parked near them.

Ahead, another construction zone? I passed the scene and realized that the dozen or so vehicles parked along the roadside were all various forms of police cars, one ominously proclaiming "Homicide Unit". Shortly off the road in a field I spotted bright yellow tape, marking a crime scene.

I tried to recall the community that had been mentioned in the news all day. Two campers had come upon a body. I attempted to pick up a radio station, but I'd lost all reception about an hour ago.

The southern tip of the loop was getting close and I looked again at my map, concerned because the "Low Gas" light had been blinking at me for miles. "Honey, I'll feed you as soon as I can," I assured my little Subaru. I hoped she could hold out.

Trepassey City Limits. It was the sign I'd been watching for, but nothing gave me hope of finding fuel. At the far edge of the community, a small auto repair shop had a single pump in its front drive. Relieved, I filled my little car, then went inside to pay.

"How long is the drive from here to Harbour Grace?" I asked the young attendant. "Gungka ummmm" he testily replied without looking up. "Okay. Well, may I use the restroom?" "Uuumkpa." I took that as a yes. I was desperate.

I considered the crime scene playing out nearby, shut my mouth, took care of business. Would hate to think the individual or individuals in the field had asked too many questions at the one local gas station. As I opened the door to the restroom, I noticed several drops of blood on the floor. Fresh blood, not yet dried to a dark red. Another young man is wiping blood off his hands as I quickened my step, hopped in the car and promised Arayo she could have a bathroom break up the road a bit.

The remainder of the loop may have been lovely. I can't say. It was lonely. I was anxious. Why didn't I think to clean the salt spray off my windshield at the station of gas and smiles? Before I met the owner. The setting sun bouncing off of windshield was blinding me.

And I needed to see. With darkness upon us, we were driving at the worst possible time in Newfoundland. Don't worry about murderers of the human kind. Darkness is when the moose come out to prowl the roads. "Never drive after dark," was the local mantra. "You hit a moose with your car and the moose wins."

I drive on through the night. Through the end of the Irish Loop. Threats from the outside of flying moose and unknown murderers. From inside of the car, Arayo places her head on my shoulder and begins the breathing pattern that I know signifies she is car sick and ready to explode.

Everyone should drive the Irish Coast.

Photos: Arayo enjoys the islands nestled near the shore at the beginning of the Irish Coast. Much of the coast is lonely.
Posted by Karyn Carpenter at 9:19 AM