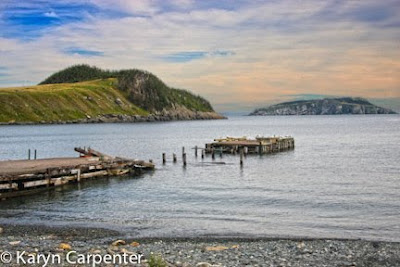 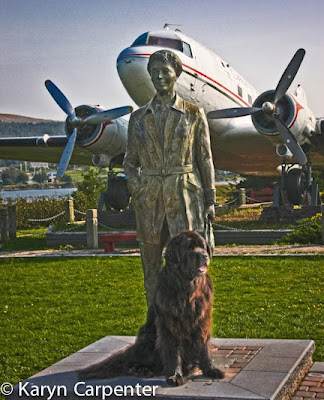 The calm of Saturday took a turn Saturday night as winds picked up - the remnants of Hurricane Earl. By the time I took Arayo out for a 6m potty break, the wind was so fierce that road signs were really swinging and singing.

The question now is if the Provincial parks are open for business so I can proceed my camping journey!

We attended two dog shows Saturday. A big beautiful Newfoundland Dog, Ch Homeport Isaac Island, bred by Devon Nutbeem and owned by Douglas and Kaireen Chaytor of Halifax won Best of Show, so the after party at Megan Nutbeem's was truly a joyful affair for we Newfoundland owners!

Photo: On May 20, 1932, Amelia Earhart became the first woman to fly solo across the Atlantic. Her trip originated from the airport of the small Newfoundland town of Harbour Grace. We titled this photo "DOG is my co-pilot". Maybe she needed a good Newfy copilot on her later journeys. The landscape image was taken on the Irish Loop. I didn't notice it when there, but in the photos, I swear that is a giant grass covered woman's torso out in the water!

Posted by Karyn Carpenter at 3:48 AM