Can't Seem to Get Newfoundland Outta My Mind 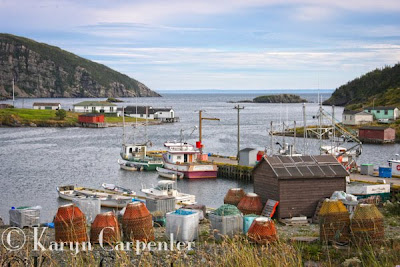 While I was able to leave the island of Newfoundland just before Hurricane Igor played havoc with much in the Province, I'm continuing with this and one other post about the island before moving on geographically with my blog. As you can see, my heart was captured by this beautiful section of the world.

Perhaps it is because I was raised in a small town that I am drawn to and most appreciate the slower pace of a rural community. In all my travels, I've found myself pulled towards the rural settings. More than cities, I think you can get an idea of what a place is like by stepping off the main roads and walking the streets of a small town.

Newfoundland communities are special. Many were built because their placement offered a cove - a protection for the fishing boats that supported the community's members. But, many of these communities are changing. With a decline in the fishing industry, the working numbers of the towns are dwindling as people leave for more populated areas to make a living. Some communities are seeing an influx in foreigners who have fallen in love with the beauty of the island, buy a home and often, live there only a few months of the year.

Some of the very isolated communities have been relocated. One such community, Grand Bruit (which means Great Noise, named for the sound of the waterfall in the center of the town), was moved this past year. Located on the southwest shore of Newfoundland, Grand Bruit is accessible only by boat and had a population of 30 people. With much sadness, the community members voted to take a buy-out from the government of $80,000 - $100,000 per family to move. For $1 a year, they can rent their home back from the government and return for visits, but they will have to get themselves there and there will be no services.

SO - other than the beauty of Newfoundland, and the lovely people. Why do I love Newfoundland?

First, you gotta love a place with the guts to be the only place, possibly in the world, to have its own time-zone. When it is Noon in Nova Scotia - Newfoundland is 12:30! Now THAT is a place after my own heart!

Then there are the names. Only peole with a sense of humor and a lot of self confidence would have towns or places with names like Cow Head, Farewell, Joe Bat's Arm or Tickle Cove.

Some places speak to the ruggedness of the island: Shambles Cove, Savage Cove, Wreck House, and Deadman's Bay. Names like those would drive a PR man nuts! And, then, why compromise when you don't have to? There are two islands named Bell Island. One off the west coast, one near the east. I have no idea how they get the mail to the right place. Maybe postal codes were designed just for them.

My favorites? Well, Witless Bay is up there, as is Too Good Arm. Hares Ears Point is pretty cute, but if I could choose an address to get my mail sent to - I think I'd opt for a town with the name of Jerry's Nose. Now, how great is that!?

Photo: The small town of Trouty has been cut off from the rest of Newfoundland after Hurricane Igor destroyed roads and flooded homes last week. This photo, taken a week before, shows the peaceful community that it was.
Posted by Karyn Carpenter at 7:54 PM