9/11 in Gander: Through The Eyes of One Who Was There 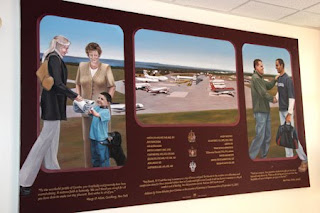 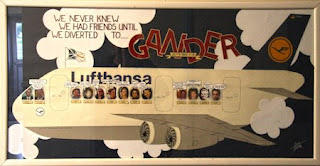 It was a normal day in Kindergarten. Tammy Mills was working with her students when she began hearing planes overhead. Lots of planes. She was used to the sound of an occasional airline as her school sits on the flight path for the Gander Airport. But, this was constant.

A mother showed up to pull her student out of class and whispered to her about an attack. Another mother arrived. At the lunch break, Tammy turned on the tv and watched the coverage, the horrible reruns of plans crashing into the Twin Towers and the towers crumbling.

When she returned to school, the principal called her aside. "We have people coming. Thousands of people have been brought to Gander. If they turn the school into a shelter, will you help?"

That evening they prepared every classroom and at about midnight they began to arrive. Hundreds of tired, scared people had been kept on the tarmac for hours until word was given to release them and to process them into Canada.

The school bus drivers were on strike but returned to volunteer their time driving people to the school and other shelters set up in town and around the area. They called Walmart for help. Pillows and blankets were needed for 7,000 people. The Walmart manager went to the store, opened it and told them to take anything they needed. Other stores did the same.

Citizens from the community opened their closets. They brought more blankets and pillows so that everyone would have one. A local dentist called and volunteers picked up cases of tooth brushes and toothpaste.

Once skies across the Atlantic were closed, the air traffic controllers showed up at the school and began preparing food in a tiny teachers' break room. There was no school cafeteria.

As passengers began arriving, they were given a room to call home, then taken to the school's tiny audio/visual room where they were shown the coverage of what had caused their flights to be diverted. Seeing what they had been shielded from until this point, the shock really set in.

A man came to the school office where supplies were kept and asked for a toothbrush. He was given one for himself and his wife, then he broke down crying. "It will be okay," Tammy assured the man. "No, you don't understand. I am on my honeymoon but my wife became ill so we decided to take an earlier flight out of New York City. Had we finished the week as we'd planned, we would have been on a tour of the Twin Towers when the planes hit."

As she was walking down a hall in the school a couple days later, she overheard a woman crying. Stopping to ask if she could help, the elderly couple explained that the wife was on blood pressure medicine and was only carrying a small amount with her. The rest was in the hold of the airplane and they were not allowed access. Tammy called the father of a student who was an MD. He immediately arrived and made sure the woman had enough medication to carry her through her time on the ground.

Locals opened their homes to the passengers. They gave them the keys to their car, directions to their homes and told them to go take a shower, a nap and help themselves to whatever was in the house to eat.

Thousands of stories of kindness filled the days while the passengers were in town. And the passengers joined together in a bond of friendship and support. The CEO of Hugo Boss was on a flight and found himself buying underwear at Walmart. Hugo Boss underwear was sent to him from St. John's, 3 1/2 hours away, but he refused to return to St. John's where he'd have a more comfortable stay. Except for wearing Walmart underwear, he was in this with his fellow passengers to the end.

As flights were given the green light to take off, Tammy and the other staff who were volunteering at the school around the clock got word that one flight was to leave in the middle of the night and they needed to find its passengers. Rather than wake some 2,000 people with a 2 am announcement over the intercom, they began making the rounds of rooms to sort out the passengers needed.

Tammy went to a room where she knew one gentleman was sleeping and gently knocked on the door. A huge man answered with a look of shock on his face - the man she was looking for. She took him to the assembly area, realizing he was terrified of something. As no one could communicate with him to assure him this was a good thing, that he was going home, they summoned an elderly woman of about 90 who spoke his language. Through several translators she explained to him that he was going home. He broke down sobbing. She explained that he could not get on the plane. He could not return to his point of departure. If he did, he would be killed.

Nine years later, Tammy admits that the events of 9/11, despite the horror of the day, remain a source of pride and joy to her. She and others were able to have an enormous impact on thousands of people who needed it. But. nine years later, the big man haunts her. She never found out if he had to return or what had become of him.

Photos: Many of the children at Tammy's school weren't born September 11, 2001. The crew members of one of the Lufthansa flights made a big thank you card for the students which is posted at the school and a memorial mural graces the walls in another location.
Posted by Karyn Carpenter at 2:56 PM