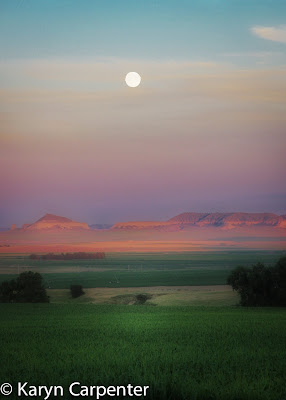 Tonight I'm camping by the water's edge. I thought I'd selected a nice quiet part of the campground. The folks across the way have a toddler and brought more toys than should be legal to own - but they are quiet and seem like nice people. Up the road a bit, a family brought along their German Shepherd. They must have left it to take a shower and it howled as though it had lost its last friend. My heart started to break for it until I realized this was just a ploy on its part. It was quiet except for these few minutes so I know this is a scam by the 4 legged one and it had the desired effect.

But, the real riot in the neighborhood happened when about 50 geese waddled through my campsite. You have never heard such honking, squaking and carrying on. Good grief, such a ruckus! They strolled along both sides of the tent then got to the water and splashed on in. I'm surprised Miz A didn't have a fit but she didn't seem to notice.

Then, in the middle of the night, all was perfectly still when I heard them…… Kirplunk. Kirplunk. Something splashing into the water. I am a certified snake-aphobw so I was certain this was the local snake population, practicing its attacks - coiling up into strike mode, hurling off logs and then, at the last minute, rolling up into a cannonballs as they hit the water.

I checked that the zippers on my doors were closed tightly and pulled the covers up tight around my chin.

Photo: Taken about a week ago - full moon rising over Western Nebraska
Posted by Karyn Carpenter at 6:51 AM